From £729 per person // 8 days
Enjoy a relaxing rail holiday taking in the stunning landscapes of the Rhine and Moselle Rivers. Your journey takes you to Trier, the 'Rome of the North', then onto the banks of the Rhine, with stays in beautiful Boppard and Rudesheim. 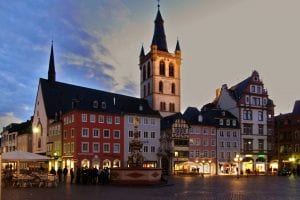 Board a Eurostar at London St Pancras or Ebbsfleet International, taking you to Belgian capital, Brussels. Here, you board an InterCity service that makes its way south into Luxembourg. Once you arrive into Luxembourg, its a short hop across to the German city of Trier, where you will be staying for the next 2 nights. Your accommodation is at the Mercure Hotel Porta Nigra (or similar), located in the centre of this historic city. 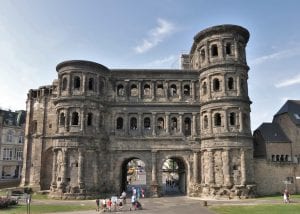 Trier is one of the oldest cities in Germany, with an impressive eight landmarks which have been designated World Heritage Sites by UNESCO. Despite this, it’s often a destination which is off the radar for foreign tourists. In some ways this is a shame, but of course it’s also an advantage for visitors looking for less crowded streets and an authentic experience. We would recommend a visit to Germany’s oldest cathedral, dating back to the 4th century AD, and the pretty Old Town area.

Trier is also nicknamed the ‘Rome of the North’ with some stunning remains to discover, including the Porta Nigra, the Roman Bridge across the Moselle River as well as the remains of an amphitheatre and Roman baths. 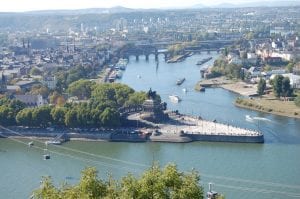 Today your journey takes you alongside the Moselle River and the surrounding rolling hills as your train twists and turns in time with the gorgeous Moselle River. On reaching Koblenz, change onto a local service for the short journey along the Rhine to Boppard, where you are staying for the next 3 nights at the Bellevue Rheinhotel (or similar). 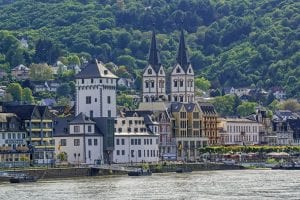 With its lovely location on a horseshoe bend in the Rhine, Boppard is one of the prettiest destinations in the region, with a flower-decorated waterfront and a charming historic centre. As well as wandering through the old town, you might also like to explore the local area. You can hike or take a chairlift up to the Vierseenblick (Four Lakes View) for fantastic views over the Rhine Valley. Alternatively, take a boat cruise and visit nearby castles like Lahneck and Lebenstein, on hilly outcrops overlooking the river.

DAY 6 - BOPPARD TO RÜDESHEIM AM RHEIN

Hop aboard any regional train along the western bank of the Rhine today, down to Bingen am Rhein. Here, you stroll down to the pier and take the famous Bingen-Rüdesheimer ferry across the mighty river. This isn’t something we can book from here, so you will need to pay the relatively nominal fare on-location. On arrival in Rüdesheim, check in at the Breuer’s Rüdesheimer Schloss (or similar) for a 2-night stay. 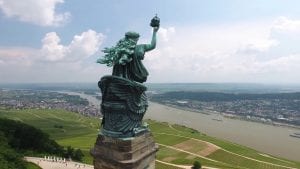 Spend a full day discovering Rüdesheim and the surrounding area. Walk along the cobbled streets of the Old Town including the famous Drosselgasse, with its wine taverns and boutiques or take in the views from the Niedervald Monument, located in the park of the same name, above the town. For even more breathtaking views, you can take a cable car up to the Germania monument and then walk the short trail along to the pretty village of Assmannshausen, with panoramic vistas all the way.

No visit to Rüdesheim would be complete with a wine tasting tour. There are plenty to choose from and you can also visit the fascinating wine museum in the stunning surroundings of Brömserburg Castle, one of the oldest in the Middle Rhine region. 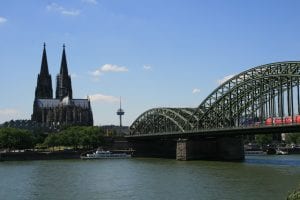 Bid farewell to the Rhine Valley today with a journey along its eastern bank to Koblenz, giving you a different perspective of the sights. On arrival in Koblenz you make an easy platform-switch onto an InterCity train up to Cologne and then a high-speed train over to Brussels, where you connect with an evening Eurostar back to London. 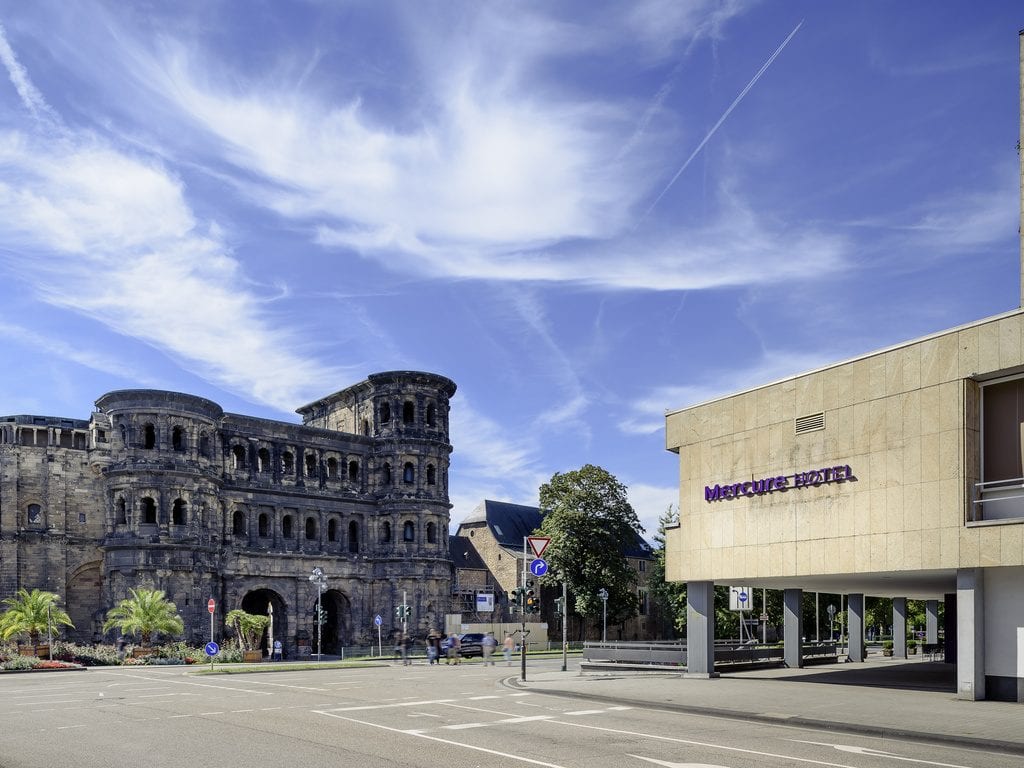 The Mercure Hotel Trier Porta Nigra is located right in the historical old town, in close proximity to all the sights and opposite the famous Porta Nigra gate. Modern rooms are furnished with air-conditioning, free Wi-Fi internet access and en suite bathrooms. The hotel also offers a restaurant serving traditional cuisine from the Rhineland-Palatinate region as well as a cocktail bar.

A landmark in its own right, the Bellevue Rheinhotel is located directly on the river, directly opposite several ferry docks. This family-run hotel boasts elegantly furnished bedrooms with modern amenities as well as an indoor swimming pool, sauna and gym. Regional specialities are served in the two on-site restaurants and in the summer, food is also served on the hotel’s riverside terrace. 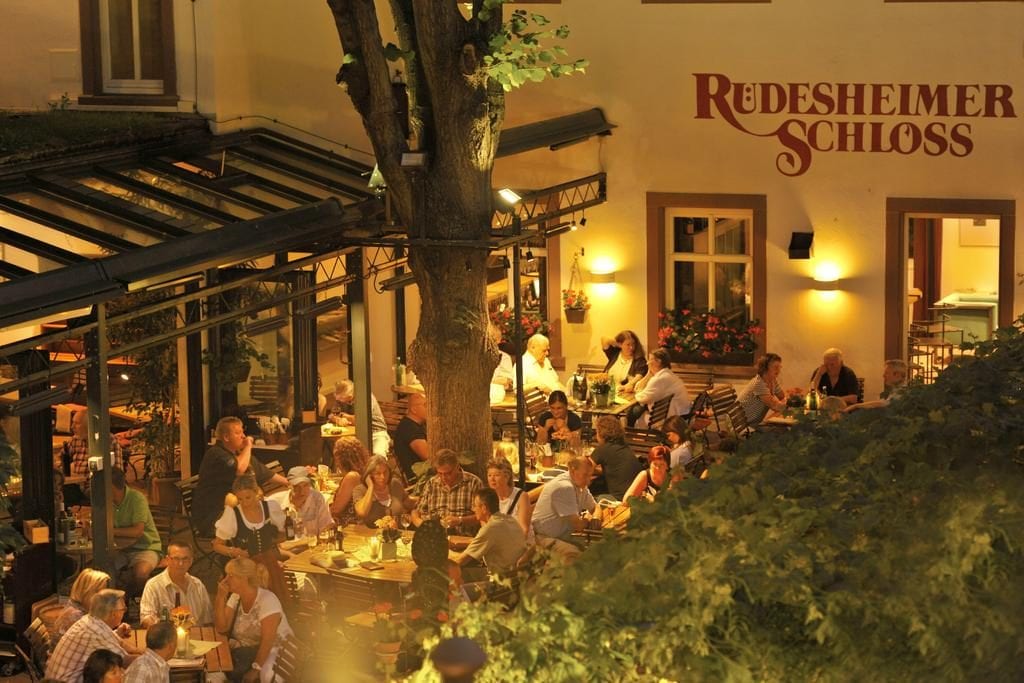 The pretty Breuer’s Rüdesheimer Schloss occupies 18th-century building in the centre of the old town, within easy walking distance of the train station. All bedrooms are designed individually with modern furnishings, cable TV and free Wi-FI internet access. The restaurant, also popular with the locals, specialises in local cuisine and offers a variety of wines from the hotel’s own winery. 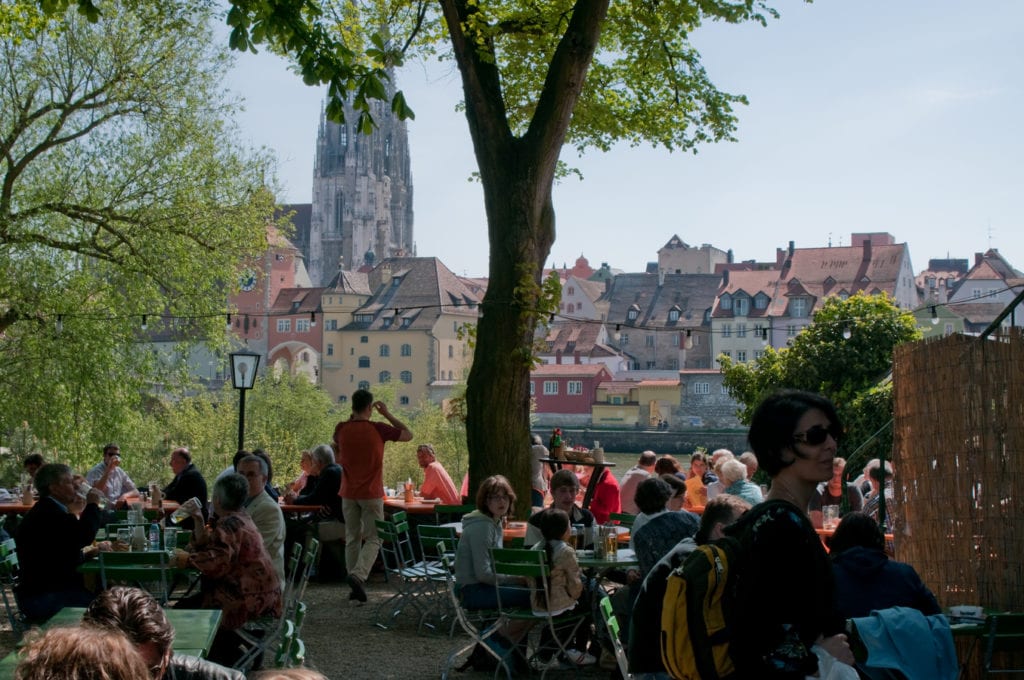 From £1,099
10 Days
Bavaria in Detail
Experience true Bavarian hospitality in this most quintessentially German of regions. Explore its architecture, countryside, castles and cities, and sip local brew in a Brauhaus with stays in Wurzburg, Rothenburg, Nuremberg and Munich.
From £1,099 per person // 10 days

From £649
6 Days
Cologne and Berlin
Enjoy a German holiday by rail with 2 nights in Cologne on the River Rhine and 3 nights in buzzing capital Berlin.
From £649 per person // 6 days

From £1,499
10 Days
Scenic Kaleidoscope by Rail
Take the train through the Ardennes to Luxembourg, then experience the Moselle and Rhine Valleys in Germany before taking in the best Alpine scenery imaginable.
From £1,499 per person // 10 days
Download Printable Itinerary
Warning: "continue" targeting switch is equivalent to "break". Did you mean to use "continue 2"? in /home/tailormaderail/public_html/wp-content/plugins/advanced-pdf-generator/public/libs/dompdf/src/Dompdf.php on line 600