The Bernina Express is one of Switzerland’s most famous rail journeys, alongside the iconic Glacier Express.  Glass-domed panorama coaches from the Rhaetian Railway ply the route from Chur to Tirano, with alternative summertime services from the glamorous resort of St Moritz. Seats will be reserved for you on both the southbound and the northbound trains.

However, this blog is not about the distinctive panoramic carriages of the tourist Bernina Express train. This is about travelling on the same line (Chur or St Moritz to Tirano) using regional services. These trains are free to travel on with a rail pass, and they offer other benefits: 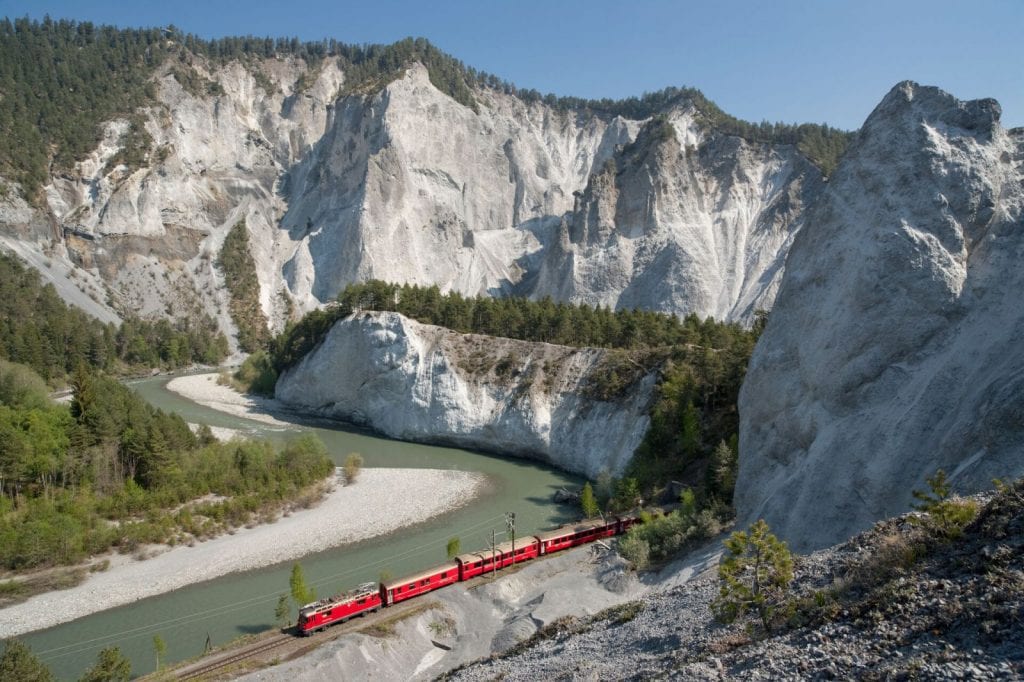 Travelling on the regular trains of the Rhaetian Railway

The Rhaetian Railway is the company that operates almost all trains in the canton of Graubunden.  With a rail pass, be that an Interrail Pass, Swiss Pass or Graubunden Pass, you are free to travel on as many trains as you like, including the regular carriages of the Bernina Express.

Journey options with regular trains along the Bernina Express line

The route from Chur to the St Moritz/Pontresina area is taken up primarily by the Albula Railway.  It contains one of the most iconic viaducts in the world, the Landwasser Viaduct, which is one of Switzerland’s most-photographed man-made structures.  Travelling through the Albula Tunnel and onto the Engadin Plain, trains from Chur running south tend to terminate at St Moritz’s picturesque station alongside its famous lake.

Potential hike: Take the train to Filisur station – if travelling from Chur you will go over the Landwasser Viaduct just before you reach Filisur.  After alighting the train, follow the signs for Landwasser Aussichtspunkt (Viewpoints) Nord and Sud (north and south).  The first viewpoint you will reach after about half a mile will be the south.  Make a note of the train times into and out of Filisur so you know what time to expect trains to be crossing the viaduct!

Once you’ve seen a train from the south viewpoint, you descent into the valley and a path takes you right underneath the viaduct itself for a rare view from below.  Then, a sharp climb takes you up onto the other side of the valley for the iconic view of the viaduct from the north viewpoint – it is this view that you will have seen on travel websites and magazines the world over, and if you can time this for when the Glacier Express goes across (northbound around 9:50am, southbound around 3:30pm but double check first!), then you’ll get the true money-shot!

Stopover in St Moritz: With almost all southbound trains from Chur terminating at St Moritz, you’ll doubtless want to have a stroll down by the lake here.  There is a branch of the excellent Migrolino mini-supermarket where you can buy a beverage or two and go and sit down by the lake on a bench or on the grass.  There is also the option of taking the long relay of escalators up into the village itself should you want to see what all the fuss is about!

Trains between Chur and St Moritz run hourly, taking two hours in total.  Just hop on and sit anywhere, get on and off trains as much as you like.

This is arguably the most spectacular train journey in the world, and travels over the Bernina Pass and is the highest mountain railway crossing in Europe.

In addition to the tourist Bernina Express trains, trains run hourly between St Moritz and Tirano throughout the year – you can board any of these trains, sit anywhere you like and break your journey wherever takes your fancy.

On departing Pontresina, the train begins to climb sharply up to the station of Bernina Diavolezza, where you can take a cable car to the summit of the Diavolezza Mountain.

Further along the line is Ospizio Bernina, located alongside Lago Bianco, a reservoir at the top of the pass, which marks the watershed between the Danube (Black Sea) and Po (Mediterranean) basins.

Potential hike: Alight from the train at Ospizio Bernina and hike to Alp Grum.  The walk takes approximately 2 hours, and the first part takes in the shoreline of the lake, before descending towards the Italian-speaking side of the canton and the remote station of Alp Grum.  Some of the views along the Poschiavo valley are unforgettable and provide some wonderful photo opportunities.  At the end of the walk, the bar/restaurant at Alp Grum is a welcome sanctuary, and being within the station building, offers little excuse for missing the train back (although they are every hour, as I mentioned before!).

From the station of Alp Grum, the line descends further into valley of the Poschiavino river and the charming village of Poschiavo itself.  This is somewhere worth hopping out for a look around, being one of the larger Italian-speaking towns in this pocket of southeastern Switzerland.

South of Poschiavo, the train runs alongside the lake of the same name, providing splendid views on the left-hand-side and halting at the station of Miralago.  A few miles along the track is the village of Brusio and the spiral viaduct that it is named for – another iconic landmark of the route, the train goes over a stretch of track that it subsequently circles around to go underneath! 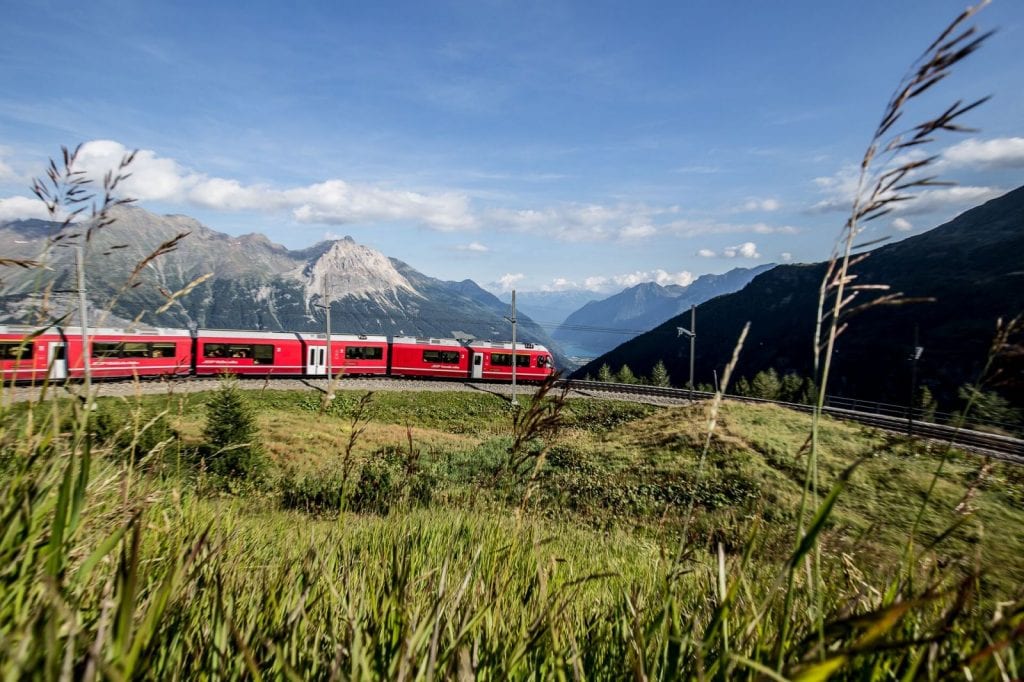 Potential hike: Jump off at Miralago, catch a video or still shot of the train pulling away alongside the glistening waters of the adjacent lake, and then follow the course of the railway line, breaking for a welcome pit-stop in Brusio village.  Then, sit in the meadow by the Brusio viaduct and await a passing train so you can get a perspective of the engineering feat – something that is all the easier to appreciate when you are not actually on board the train!  Then, continue downhill to Campocologno, to then either return north into Switzerland or south into Italy.

The final stretch of the Bernina Line runs through the hamlet of Campocologno, the last station in Switzerland, around 500 yards before the Italian border.  Then, the train steeply descends into the town of Tirano, passing through streets in tram-style, before terminating at Tirano’s RhB (Rhatische Bahn) station.  This section of the station is right alongside the Trenitalia station, which then has onward connections south towards Lake Como and eventually Milan.

This southern section of the Bernina Express route, between St Moritz and Tirano, sometimes has what are known as Aussichtswagen, which are open-sided carriages without a roof, run during the summer months when weather is guaranteed set fair for the day.

These are not guaranteed on any particular day, and you can treat it as a complete bonus if you see them, but if you do, it’s an unforgettable experience travelling on one of the world’s most spectacular journeys completely exposed to the elements! 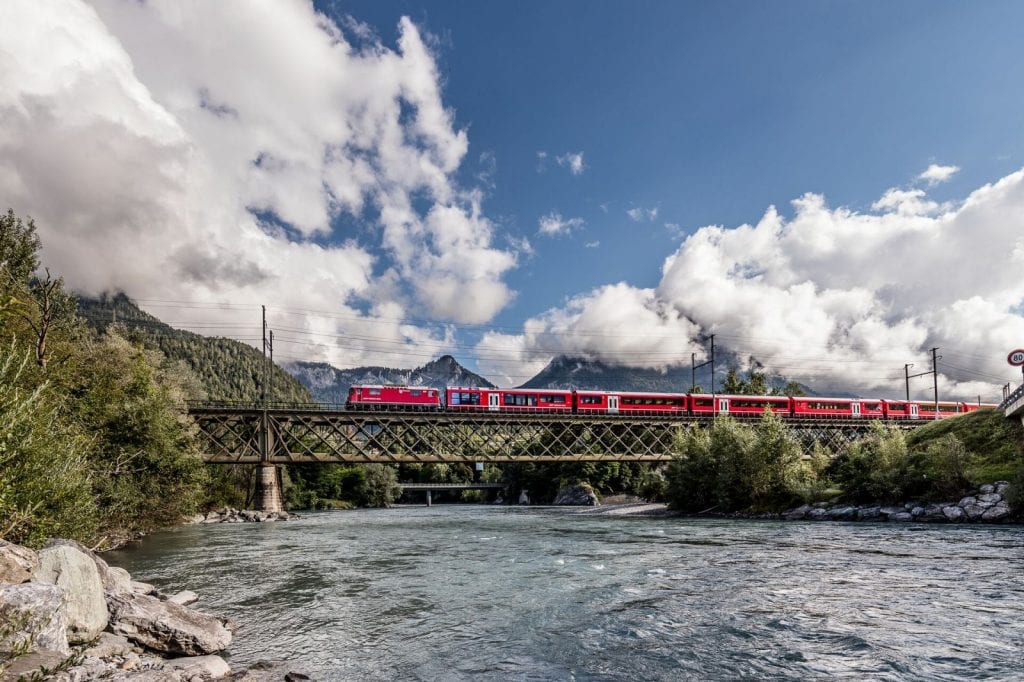 PLEASE NOTE: The Bernina Express itself has normal (ie non-panorama carriages) attached and you can also take these without a reservation. At the front of each Bernina Express train when you reach the platform at Chur, there are two carriages of Standard Class seating, and one carriage of First Class, alongside their glass-topped counterparts for tourists.

The First Class part of the “regular” carriages is directly behind the driver, so you get some spectacular views, especially if they don’t pull the blind down between you and them!

Alternatively, why not walk the route with our Track the Bernina Express Walking Holiday? 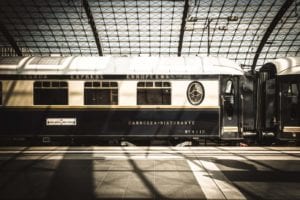 From £849
4 Days
Glacier and Bernina Expresses
Take a whistlestop tour of Switzerland and experience two of its most famous rail journeys - the Glacier Express and the Bernina Express.
From £849 per person // 4 days 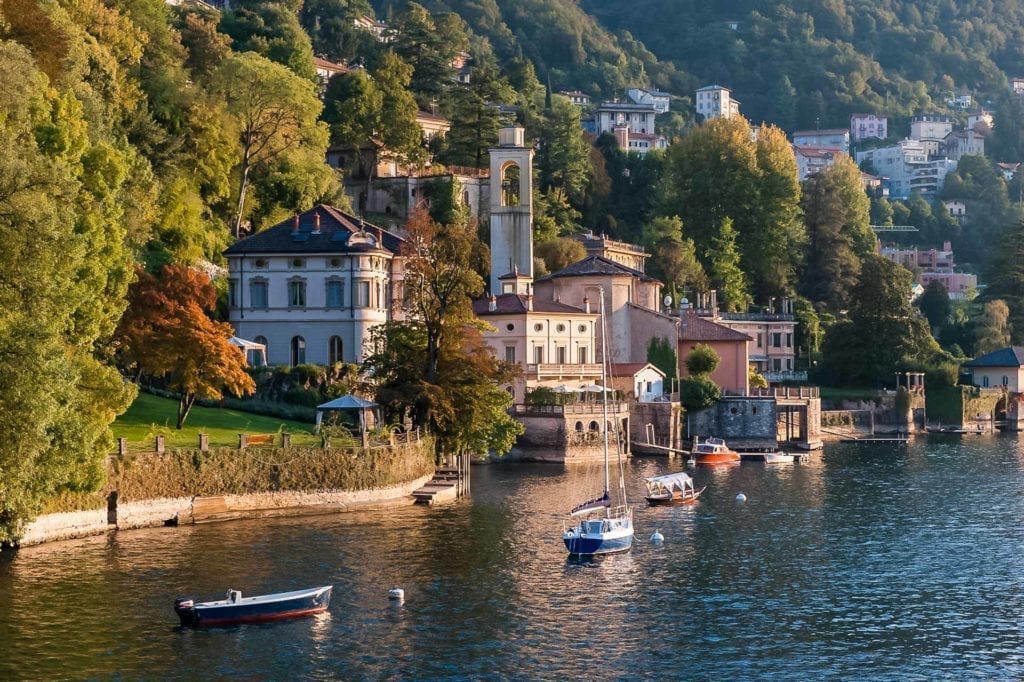 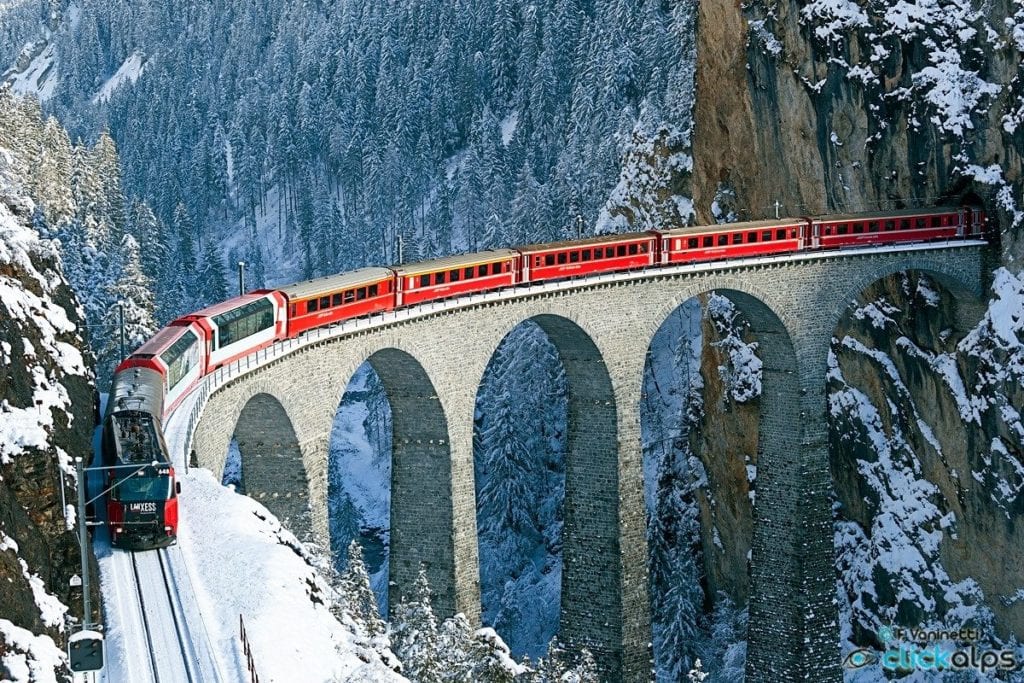 From £1,999
13 Days
Grand Tour of Switzerland
From east to west and top to bottom, take an epic tour of Switzerland by rail, including stunning mountain vistas, lakefront resorts and some of the country's most famous scenic rail journeys.
From £1,999 per person // 13 days